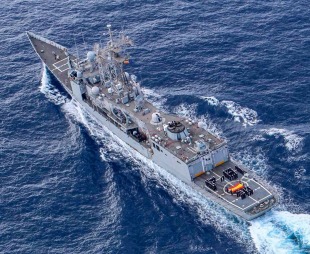 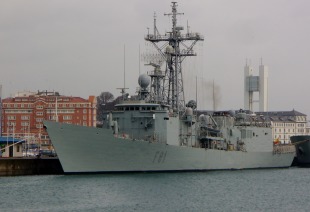 Santa María (F81) is the lead ship of six Spanish-built Santa Maria-class frigates, based on the American Oliver Hazard Perry class design, of the Spanish Navy. Laid down on 22 May 1982 and launched on 11 November 1984, the Santa María was commissioned into service on 12 October 1986.

All of these Spanish frigates have the length of the later Oliver Hazard Perry frigates, and have a wider beam than the US Navy design, and therefore able to carry more top weight. Fin stabilizers are fitted.

In the American series J.A.G., Santa Maria was used to depict a fictional US Navy Oliver Hazard Perry-class frigate. Her Spanish pennant number F81 is clearly visible in a number of shots.