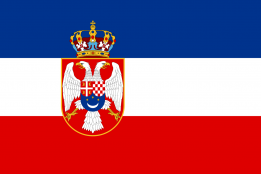 The Royal Navy, commonly the Royal Yugoslav Navy, was the naval warfare service branch of the Kingdom of Yugoslavia (originally called the Kingdom of Serbs, Croats and Slovenes). It was brought into existence in 1921, and initially consisted of a few former Austro-Hungarian Navy vessels surrendered at the conclusion of World War I and transferred to the new nation state under the terms of the Treaty of Saint-Germain-en-Laye. The only modern sea-going warships transferred to the new state were twelve steam-powered torpedo boats, although it did receive four capable river monitors for use on the Danube and other large rivers. Significant new acquisitions began in 1926 with a former German light cruiser, followed by the commissioning of two motor torpedo boats (MTBs) and a small submarine flotilla over the next few years. When the name of the state was changed to Yugoslavia in 1929, the name of its navy was changed to reflect this. In the late 1920s, several of the original vessels were discarded.

On the eve of World War II, the navy consisted of 611 officers and 8,562 men, operating 41 combatant ships and 19 auxiliaries.

While the Royal Yugoslav Navy was largely captured by Italian forces during the German-led Axis invasion of Yugoslavia in April 1941, a few of its vessels, aircraft and their crews escaped and served in the Mediterranean under Royal Navy control during the remainder of World War II. When the Italians sued for peace in September 1943, most of the remaining vessels were taken over by the German Kriegsmarine or the Navy of the Independent State of Croatia. Towards the end of the war, the Allies transferred a corvette to Yugoslav control. At the end of the war, the few remaining vessels were transferred to the control of the new Federal People's Republic of Yugoslavia. As the post-war Yugoslav Navy drew its lineage from the naval forces of the wartime Yugoslav Partisans rather than the Royal Yugoslav Navy, few of the customs and traditions of the Royal Yugoslav Navy survived in the successor force.