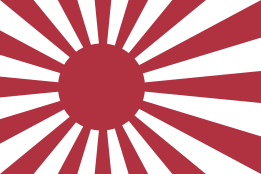 The Imperial Japanese Navy (IJN) was the navy of the Empire of Japan from 1868 until 1945, when it was dissolved following Japan's defeat and surrender in World War II. The Japan Maritime Self-Defense Force (JMSDF) was formed after the dissolution of the IJN.

The Japanese Navy was the third largest navy in the world by 1920, behind the Royal Navy and the United States Navy. It was supported by the Imperial Japanese Navy Air Service for aircraft and airstrike operation from the fleet. It was the primary opponent of the Western Allies in the Pacific War.

The origins of the Imperial Japanese Navy go back to early interactions with nations on the Asian continent, beginning in the early medieval period and reaching a peak of activity during the 16th and 17th centuries at a time of cultural exchange with European powers during the Age of Discovery. After two centuries of stagnation during the country's ensuing seclusion policy under the shōguns of the Edo period, Japan's navy was comparatively backward when the country was forced open to trade by American intervention in 1854. This eventually led to the Meiji Restoration. Accompanying the re-ascendance of the Emperor came a period of frantic modernization and industrialization. The navy's history of successes, sometimes against much more powerful foes as in the Sino-Japanese war and the Russo-Japanese War, ended in almost complete annihilation during the concluding days of World War II, largely by the United States Navy. The Japanese Maritime Self-Defense Force was founded as a replacement two years after the end of Occupation of Japan.