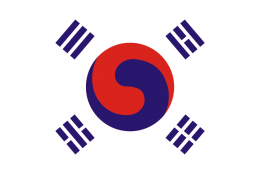 The Great Korean Empire was proclaimed in October 1897 by Emperor Gojong of the Joseon dynasty, under pressure after the Donghak Peasant Revolution of 1894 to 1895 and the Gabo Reforms that swept the country from 1894 to 1896.

By the end of 19th century, the Joseon navy had no significant naval force other than coast defense fortresses. Although there was an attempt to modernize the navy by establishing a royal naval school with the assistance of the Royal Navy personnel, namely Lieutenant William Callwell of the Royal Marines, the Joseon navy (i.e. Commander-in-Chief Three-Provincial Fleet) was brought to an end in 1895.

In 1903, the government of the Korean Empire purchased its first modern war ship, the Yangmu, from Japan. She was originally a cargo ship called the Kachidatemaru. The Korean naval tradition was disrupted after Korea was annexed by the Empire of Japan in 1910.