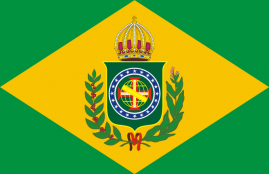 The Imperial Brazilian Navy (Portuguese: Armada Nacional, commonly known as Armada Imperial) was the navy created at the time of the independence of the Empire of Brazil from the United Kingdom of Portugal, Brazil and the Algarves. It existed between 1822 and 1889 during the vigency of the constitutional monarchy. The Navy was formed almost entirely by ships, staff, organizations and doctrines proceeding from the transference of the Portuguese Royal Family in 1808. Some of its members were native-born Brazilians, who under Portugal had been forbidden to serve. Other members were Portuguese who adhered to the cause of separation and German and Irish mercenaries. Some establishments created by King João VI were used and incorporated. Under the reign of Emperor Pedro II the Navy was greatly expanded to become the fifth most powerful navy in the world and the armed force more popular and loyal to the Brazilian monarchy. The republican coup d'état in 1889, led by army men, put an end to the Imperial Navy that fell into decay until the new century.