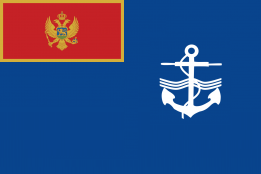 The Montenegrin Navy is a branch of the Military of Montenegro.