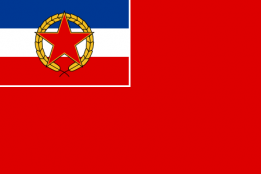 The Yugoslav Navy was the navy of the Socialist Federal Republic of Yugoslavia. It was essentially a coastal defense force with the mission of preventing enemy landings along the Yugoslavia's rugged 4,000- kilometer shoreline or coastal islands, and contesting an enemy blockade or control of the strategic Strait of Otranto.