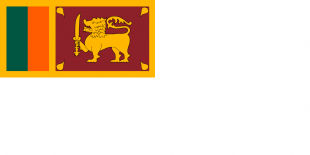 The Sri Lankan Navy (SLN) is the naval arm of the Sri Lanka Armed Forces and is classed as the country's most vital defence force due to its island geography. The SLN is responsible for the maritime defense of the Sri Lankan nation and its interests.

Sri Lanka, situated in the middle of major sea lanes passing through the Indian Ocean, was always a magnet for seafarers and has a long history of naval campaigns. The current Sri Lankan Navy was established on 9 December 1950 when the Navy Act was passed for the formation of the Royal Ceylon Navy. The roots of the modern Sri Lankan Navy date back to 1937 when the Ceylon Naval Volunteer Force was established, which was renamed and absorbed into the Royal Navy as the Ceylon Royal Naval Volunteer Reserve during World War II. The current name Sri Lanka Navy was constituted in 1972 when Sri Lanka became a republic and the introduction of new constitution.

In recent years it has played a key role in the Sri Lankan Civil War, conducting surveillance and patrol, amphibious and supply operations. During the war, the navy moved from a small force focused on coastal patrols to a large combat force concentrating on asymmetric naval warfare capable of amphibious and land operations in support of counter-insurgency operation that progressed into engagements of a new form of littoral zone warfare. It carried out expeditionary deployments in the Indian Ocean in order to intercept rogue arm shipments on the high seas. The navy has its own elite special forces unit, the Special Boat Squadron.

The professional head of the navy is the Commander of the Navy. The commander-in-chief of the Sri Lankan Armed Forces is the President of Sri Lanka, who heads the National Security Council through the Ministry of Defence, which is the highest level of military command and procurement for the armed forces. Operations of the Sri Lanka Navy are coordinated with the other armed forces by the Joint Operations Command.