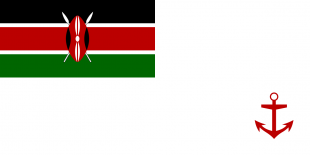 Kenya Navy is the naval branch of Kenyan military forces. It is headquartered in Mombasa.

Kenya Navy has Mtongwe base in Mombasa, Shimoni, Msambweni, Malindi, Kilifi and since 1995 another base located in Manda (part of Lamu Archipelago).

The Kenyan Navy was established on 12 December 1964, exactly one year after Kenya gained independence. It was preceded by the colonial Royal East African Navy (REAN). Following the disbanding of the REAN in 1962, the East African Railways and Harbours Co-operations assumed control of naval operations in the former East African colonies until the independent states established their own navies.

On 4 September 2012 the Kenyan Navy shelled the Somali city of Kismayo. This was part of an African Union offensive to capture the city from al-Shabab fighters during the War in Somalia. The harbour was shelled two times and the airport three times. According to a UN report the export of charcoal through Kismayo is a major source of income for al-Shabab.