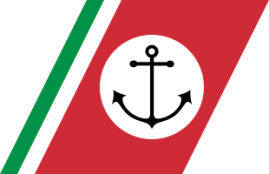 The Corps of the Port Captaincies – Coast Guard (Italian language: Corpo delle Capitanerie di porto – Guardia costiera) is the coast guard of Italy and is part of the Italian Navy under the control of the Ministry of Infrastructure and Transport. Its head office is in Rome.

The Italian Coast Guard is the operational SAR branch of the Corpo delle Capitanerie di Porto or Corps of the Port Captaincies, which was organized first by royal decree in 1865. It was reorganized as part of the Regia Marina in 1915 (since 1946 as Marina Militare) and on June 8, 1989, redesignated as Guardia costiera.

The missions of the Italian Coast Guard include: