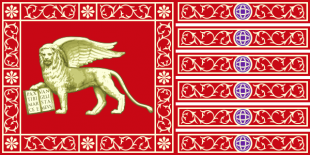 The Venetian navy (Venetian: Armada) was the navy of the Venetian Republic, and played an important role in the history of Venice, the Republic and the Mediterranean world. The premier navy in the Mediterranean for many centuries, from the medieval to the early modern period, it gave Venice a control and influence over trade and politics in the Mediterranean far in excess of the size of the city and its population. It was one of the first navies to mount gunpowder weapons aboard ships, and through an organised system of naval dockyards, armouries and chandlers, (the Venetian Arsenal, which was one of the greatest concentrations of industrial capacity prior to the Industrial Revolution) was able to continually keep ships at sea, and to rapidly make good any losses.

Driven at first by a rivalry with the Byzantine Empire, and later the Maritime Republics of Pisa and Genoa for primacy over trade with the Levant, the Venetian navy was at times technically innovative and yet operationally conservative. With the final fall of Constantinople it played a key role in checking the maritime advance of the Ottoman Empire for over three centuries. The navy's long decline mirrored that of the Republic, beginning in the 16th century and ending with the capitulation of the city to Napoleon in 1796.