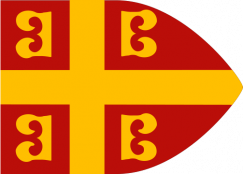 The Byzantine navy was the naval force of the East Roman or Byzantine Empire. Like the empire it served, it was a direct continuation from its Imperial Roman predecessor, but played a far greater role in the defence and survival of the state than its earlier iteration. While the fleets of the unified Roman Empire faced few great naval threats, operating as a policing force vastly inferior in power and prestige to the legions, the sea became vital to the very existence of the Byzantine state, which several historians have called a «maritime empire».

The first threat to Roman hegemony in the Mediterranean was posed by the Vandals in the 5th century, but their threat was ended by the wars of Justinian I in the 6th century. The re-establishment of a permanently maintained fleet and the introduction of the dromon galley in the same period also marks the point when the Byzantine navy began departing from its late Roman roots and developing its own characteristic identity. This process would be furthered with the onset of the Muslim conquests in the 7th century. Following the loss of the Levant and later Africa, the Mediterranean Sea was transformed from a «Roman lake» into a battleground between Byzantines and Arabs. In this struggle, the Byzantine fleets were critical, not only for the defence of the Empire's far-flung possessions around the Mediterranean basin, but also for repelling seaborne attacks against the imperial capital of Constantinople itself. Through the use of the newly invented «Greek fire», the Byzantine navy's best-known and feared secret weapon, Constantinople was saved from several sieges and numerous naval engagements were won for the Byzantines.

Initially, the defence of the Byzantine coasts and the approaches to Constantinople was borne by the great fleet of the Karabisianoi. Progressively however it was split up into several regional (thematic) fleets, while a central Imperial Fleet was maintained at Constantinople, guarding the city and forming the core of naval expeditions. By the late 8th century, the Byzantine navy, a well-organized and maintained force, was again the dominant maritime power in the Mediterranean. The antagonism with the Muslim navies continued with alternating success, but in the 10th century, the Byzantines were able to recover a position of supremacy in the Eastern Mediterranean.

During the 11th century, the navy, like the Empire itself, began to decline. Faced with new naval challenges from the West, the Byzantines were increasingly forced to rely on the navies of Italian city-states like Venice and Genoa, with disastrous effects on Byzantium's economy and sovereignty. A period of recovery under the Komnenians was followed by another period of decline, which culminated in the disastrous dissolution of the Empire by the Fourth Crusade in 1204. After the Empire was restored in 1261, several emperors of the Palaiologan dynasty tried to revive the navy, but their efforts had only a temporary effect. By the mid-14th century, the Byzantine fleet, which once could put hundreds of warships to sea, was limited to a few dozen at best, and control of the Aegean passed definitively to the Italian and Ottoman navies. The diminished navy, however, continued to be active until the fall of the Byzantine Empire to the Ottomans in 1453.