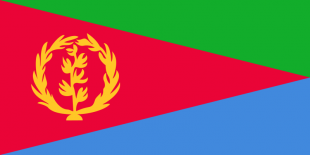 The Eritrean Navy is a smaller branch of the Eritrean Defence Forces. It is responsible for the security of the entire coastline of Eritrea, more than 1,100 km, as well as the Eritrean territorial waters.

These forces played a critical role at the Battle of Massawa when they sank several Ethiopian warships in the harbor. At the close of the Eritrean War of Independence, the balance of the Ethiopian Navy was inherited by this naval force.