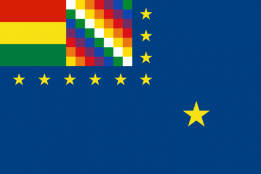 The Bolivian Navy (Spanish: Armada Boliviana) is a branch of the Bolivian Armed Forces. As of 2008, the Bolivian Naval Force had approximately 5,000 personnel. Although Bolivia has been landlocked since the War of the Pacific in 1904, Bolivia established a River and Lake Force (Fuerza Fluvial y Lacustre) in January 1963 under the Ministry of National Defense. It consisted of four boats supplied from the United States and 1,800 personnel recruited largely from the Bolivian Army. The Bolivian Navy was renamed the Bolivian Naval Force (Fuerza Naval Boliviana) in January 1966, but it has since been called the Bolivian Navy (Armada Boliviana) as well. It became a separate branch of the armed forces in 1963. Bolivia has large rivers which are tributaries to the Amazon which are patrolled to prevent smuggling and drug trafficking. Bolivia also maintains a naval presence on Lake Titicaca, the highest navigable lake in the world, across which runs the Peruvian frontier.

Landlocked Bolivia has not reconciled with the loss of its coast to Chile and the Navy exists to keep the hope alive of recovering its coast by cultivating a maritime consciousness. The Bolivian Navy takes part in many parades and government functions, but none more so than the Día Del Mar (Day of the Sea) in which Bolivia, every year, re-vindicates its claim for an unspecified sovereign access to the sea.

Bolivia claims the country had access to the sea at independence in 1825. In the Boundary Treaty of 1866 between Chile and Bolivia the involved parties agreed on a border line that established a sea access for Bolivia recognized by Chile. In the War of the Pacific (1879–1883) Chile defeated Peru and Bolivia and conquered the Bolivian coastal territories. The recovery of its coastline is a matter of honor in Bolivia, influencing many modern-day political actions and trade decisions.

In 2010, Peru granted Bolivia «dock facilities, a free-trade zone and space for economic activities» along with the option to «build a Pacific Coast annex for the Bolivian navy school» in a 99-year deal.