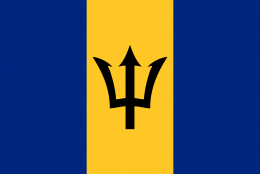 The Barbados Coast Guard is the maritime division of the Barbados Defence Force. Its responsibilities are patrolling Barbados' territorial waters as well as drug interdiction and humanitarian and life-saving exercises. The Barbados Coast Guard currently is based at its new home at HMBS Pelican in Bridgetown, the capital of Barbados. The base consists of a partially enclosed base for the coast guard fleet to dock. It consists of a small fleet, including its flagship HMBS Trident.

The usual styling for the Barbados Coast Guard is HMBS which stands for His/Her Majesty's Barbadian Ship.