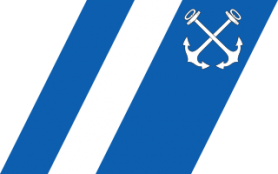 The Hellenic Coast Guard (Greek Λιμενικό Σώμα-Ελληνική Ακτοφυλακή – Limeniko Soma-Elliniki Aktofylaki – lit. «Port Corps-Hellenic Coast Guard») is the national coast guard of Greece. Like many other coast guards, it is a paramilitary organization that can support the Hellenic Navy in wartime, but resides under separate civilian control in times of peace. It was founded in 1919 by an Act of Parliament (N. 1753/1919) and the legal framework for its function was reformed in 1927. The current name is specified in Law 3022/2011.

In order to perform these roles, the Coast Guard operate a number of patrol boats of various sizes (6m to 60m) and different types (RIBs, coastal patrol boats, offshore patrol boats, lifeboats and pollution control vessels). On land the Hellenic Coast Guard is equipped with cars and motorcycles.

Between May 21, 1964 and 1980 the Hellenic Coast Guard had its own special flag, which was derived from the Greek Ensign with the addition of the crossed anchors badge on the center of the white cross.