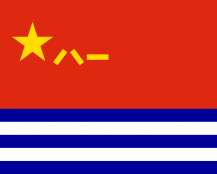 The People's Liberation Army Navy, also known as the PLA Navy, is the naval warfare branch of the People's Liberation Army, which is the armed wing of the Communist Party of China and, by default, the national armed forces of the People's Republic of China. The PLAN can trace its lineage to naval units fighting during the Chinese Civil War and was established in September 1950. Throughout the 1950s and early 1960s the Soviet Union provided assistance to the PLAN in the form of naval advisers and export of equipment and technology. Until the late 1980s, the PLAN was largely a riverine and littoral force (brown-water navy). However, by the 1990s, following the fall of the Soviet Union and a shift towards a more forward-oriented foreign and security policy, the leaders of the Chinese military were freed from worrying over land border disputes, and instead turned their attention towards the seas. This led to the development of the People's Liberation Army Navy into a green-water navy by 2009. Before the 1990s the PLAN had traditionally played a subordinate role to the People's Liberation Army Ground Force.

In 2008, General Qian Lihua confirmed that China plans to operate a small fleet of aircraft carriers in the near future, but for the purpose of regional defence as opposed to «global reach». As of 2013 PLA officials have also outlined plans to operate in the first and second island chains. Chinese strategists term the development of the PLAN from a green-water navy into «a regional blue-water defensive and offensive navy.»

The People's Liberation Army Navy is composed of five branches; the Submarine Force, the Surface Force, the Coastal Defense Force, the Marine Corps and the Naval Air Force. With a personnel strength of 255,000 servicemen and women, including 10,000 marines and 26,000 naval air force personnel, it is the second largest navy in the world in terms of tonnage, only behind the United States Navy, and has the largest number of major combatants of any navy. 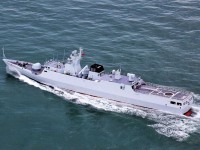