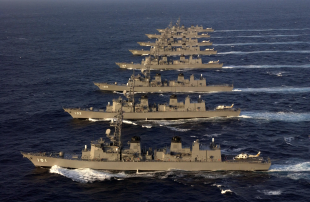 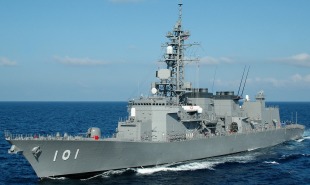 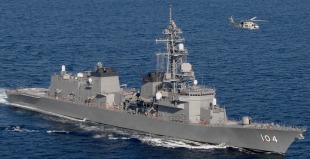 The Murasame-class destroyer is a class of destroyers, serving with the Japan Maritime Self-Defense Force (JMSDF). This is the first class of the second-generation general-purpose destroyers of the JMSDF.

The hull design was completely renovated from first-generation DDs. In addition to increasing the size in order to reduce the underwater radiation noise, both superstructure and hull was inclined to reduce the radar cross-section. There is however no angled tripod mainmast like the one of the American Arleigh Burke-class destroyer because of the heavy weather of the Sea of Japan in winter. The aft was designed like a «mini-Oranda-zaka» as with the Kongō class to avoid interference between helicopters and mooring devices.

The engine arrangement is COGAG as same as Asagiri class, but a pair of engines are updated to Spey SM1C. And the remaining one pair are replaced by LM2500, same as Kongō class.

The basic configuration of the equipment is the same as first-generation DDs, but they are updated and enhanced throughout. Concepts of its combat system were partly based on those of Kongō class. Two large-screen displays and OJ-663 consoles are introduced in its OYQ-9 combat direction system as Aegis Weapon System (AWS). And OYQ-103 ASW combat systems, based on OYQ-102 of Kongō class and indirectly AN/SQQ-89, presents an integrated picture of the tactical situation by receiving, combining and processing active and passive sensor data from the hull-mounted array, towed array and sonobuoys.

The advanced OPS-24 active electronically scanned array radar and OPS-28 surface search and target acquisition radar introduced into the fleet with the latter batch of the Asagiri class remains on board, and there are some new systems such as the NOLQ-3 electronic warfare suite and OQS-5 bow mounted sonar.

Aircraft facility is expanded to accommodate two shipboard helicopters. One Mitsubishi SH-60J/K is a basic load, and another can be accommodated in case of overseas operation. 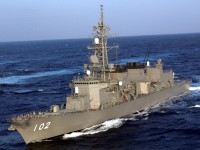