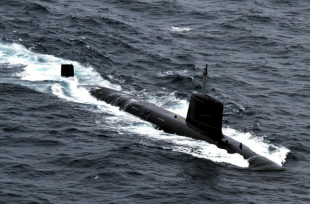 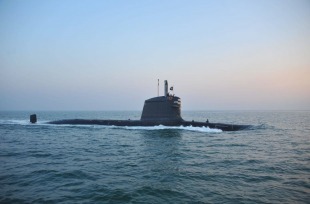 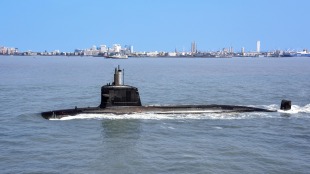 The Scorpène-class submarines are a class of diesel-electric attack submarines jointly developed by the French Naval Group (formerly the Direction des Constructions Navales) and the Spanish company Navantia. It features diesel propulsion and an additional air-independent propulsion (AIP). It is now marketed as the Scorpène 2000.

The Scorpène class of submarines has three subtypes: the CM-2000 conventional diesel-electric version, the AM-2000 air-independent propulsion (AIP) derivative, the downsized CA-2000 coastal submarine, and the enlarged S-BR for the Brazilian Navy, without AIP.

The Chilean and Malaysian boats are fitted with the TSM 2233 Mk 2 sonar. The class can also be fitted with a 'S-Cube' sonar suite from Thales.

The French Module d'Energie Sous-Marine Autonome (MESMA) system is being offered by the French shipyard Direction des Constructions Navales (DCNS) for the Scorpène-class submarines. It is essentially a modified version of their nuclear propulsion system, with heat being generated by ethanol and oxygen. The combustion of the ethanol and stored oxygen, at a pressure of 60 atm (6.1 MPa), generates steam which powers a conventional turbine power plant. This pressure-firing allows exhaust carbon dioxide to be expelled overboard at any depth without an exhaust compressor.

Each MESMA system costs around US$50–60 million. As installed on the Scorpènes, it requires adding a new 8.3-metre (27 ft), 305-tonne hull section to the submarines, and enables a submarine to operate for more than 21 days underwater depending on speed.

In 2005, India chose the Scorpène design; purchasing six submarines for US$3 billion (US$500 million per boat). Under a technology transfer agreement, the state-owned Mazagon Docks in Mumbai was to manufacture the submarines, and deliver them between 2012 and 2016, however the project is running six years behind schedule. Construction started on 23 May 2009. In August 2016, over 20,000 confidential pages of the submarine's manual were leaked by Australian media, stirring up a controversy about the impact to India's ambitions of fielding a blue-water navy.

DCNS answered that those documents were not crucial. After extensive sea trials, Kalvari was commissioned into the Indian Navy on 14 December 2017.

In 2009, Brazil purchased four enlarged Scorpènes for US$ 10 billion with a technology transfer agreement and a second agreement to develop a French/Brazilian nuclear-powered submarine. The Brazilian submarine class was given the designation Riachuelo class. The hull of the first S-BR (S40) was laid down at Cherbourg on 27 May 2010 and is to be jumboized at the Brazilian Navy Shipyard in Sepetiba in late 2012. The latter three submarines will be built there entirely, and are planned to be commissioned in 2020, 2021, and 2022. The nuclear-powered submarine Álvaro Alberto is under construction since 2018, with scheduled launch for 2027.

The first submarine Riachuelo was launched on 14 December 2018, and began sea trials in September 2019. All the submarines are built by the Brazilian defence company Itaguaí Construções Navais.