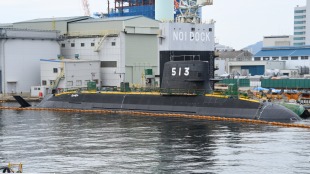 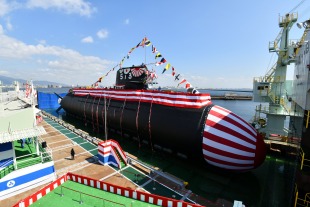 The Taigei-class submarines (29SS), «Big Whale», is a new class of attack submarines developed for the Japan Maritime Self-Defense Force. It is the successor to the Sōryū class. The Taigei class is equipped with a large amount of lithium-ion batteries, as is the case with the eleventh and twelfth submarines of the Sōryū class (Ōryū and Tōryū), making it possible for the submersible to travel longer and at higher speeds under water than conventional diesel-electric submarines.

The development of the Taigei class were conducted from a variety of researches aimed at developing new and improved submarine components to improve the capabilities of «next-generation submarines» that will operate in the 2020s and beyond.

The hull design of the Taigei class is said to not differ too much from the Sōryū class but will be 100 tons heavier than its predecessor. However, the Taigei-class submarines will be more advanced as they are equipped with newer equipment such as sonar systems, snorkel power generation system. The Taigei class will use lithium-ion batteries much like the JS Ōryū and JS Tōryū submarines. The submarine will likely use the Type 18 torpedo, which project name as «G-RX6».

The first submarine of this class, Taigei, will be converted to a test submarine. The reason for the change is due to the need to acquire a dedicated test submarine instead of pulling an ordinary submarine from its operations to conduct tests. By doing so, the JMSDF can increase operating days and strengthen monitoring activities with their attack submarines while the test submarine will accelerate research and development.