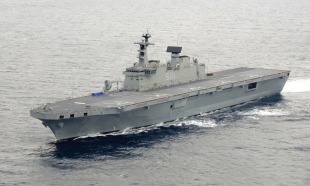 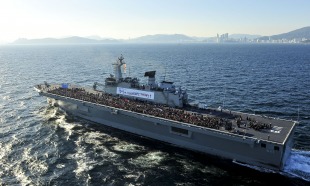 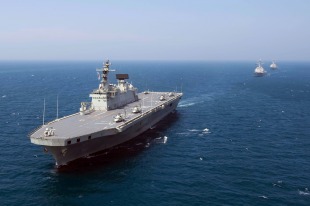 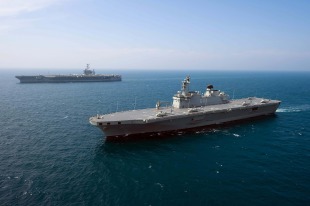 The Dokdo-class amphibious assault ship is a Landing Platform Helicopter (LPH) operated by the Republic of Korea Navy (ROKN). Designed by Hanjin Heavy Industries (HHIC), the requirements for the amphibious landing ships were to enhance South Korea's current amphibious operation capability, both in terms of assault and military operations other than war (MOOTW) type operations. The name of the ship's class caused controversy because it is named after a disputed island with Japan.

The ROK Navy required a versatile landing ship with amphibious capabilities in its program to build a blue-water navy. In the end Hanjin's Dokdo design was chosen for this need. Solgae-class LCAC-also built by HHIC, was chosen as the LCAC to operate from the ship.

The LPH is a versatile amphibious warfare ship which includes a well deck to accommodate Amphibious Assault Vehicles (AAVs) and two Landing Craft Air Cushion (LCAC), the first of which (LSF 631) was acquired in April 2007. The ship is 199 metres (652 ft 11 in) long, 31 metres (101 ft 8 in) wide, with a 14,000 ton (empty), or 18,000 ton (full) displacement and was also built incorporating stealth technologies.

As a high-speed amphibious ship, LPH was based on the concept of «over-the-horizon assault.» As the name indicates, the «over-the-horizon assault» comprises a military operation in which an amphibious landing is conducted with high-speed air-cushioned vehicles and helicopters from beyond the horizon, where they cannot be easily detected or attacked by the enemy. The conventional LST (landing ship tank) has to approach the coastline for landing, at the risk of being fired upon by the enemy.

The LPH can carry 720 marines (+300 crew members), 10 tanks, 10 trucks, 7 AAVs, three field artillery pieces, and two LCAC hovercraft capable of landing on enemy shores doing 40 knots (74 km/h)—a mix that enables it to launch troop landings from both sea and air. She can also carry 10 helicopters when there are no ground vehicles on her hangar deck.

The flight surface is also sprayed with urethane, which can support VTOL jets, like Harriers. South Korea is considering the purchase of F-35B fighters to operate from its Dokdo-class ships. Currently, the LPH operates mainly UH-1H and UH-60P. However, both of these are designed for land‐based operations and lack abilities for ship-borne operations such as protection against damage from salty breezes making them difficult to operate on-board continuously. The KUH-Amphibious, the sea-based amphibious variant of the KAI Surion, is now under development. Production is planned to commence in late 2015 with some 40 helicopters planned.

The second ship of the class, Marado, was built with some changes compared to Dokdo. The flight deck is adapted to accommodate two V-22 Ospreys, while Dokdo was able to only carry one. In place of the Thales SMART-L multibeam radar and MW08 surveillance radar, Marado uses the Elta Systems EL/M-2248 MF-STAR multifunction surveillance radar and LIG Nex1 SPS-550K 3-D air and surface surveillance radar. It also has a different weapons suite than the 30 mm Goalkeeper and RAM, instead using two 20 mm Phalanx CIWS and having a K-VLS at the rear of the superstructure for the locally developed K-SAAM.

Some proposed uses for the ship include UN peacekeeping operations and disaster relief. For this reason, the LPH is expected to usher in a new era of expanded South Korean naval activity, since it can be used for relief, transport, and other peacetime activities.