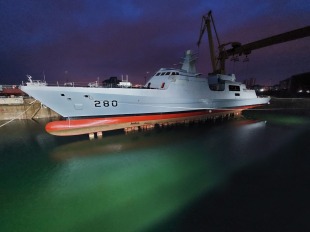 The Babur-class corvette is a class of four heavy corvettes under construction for the Pakistan Navy. This class is designated from Turkish MILGEM project. The corvette class is heavier and larger than the Turkish Ada-class corvette, also equipped with VLS.

As for its anti-surface warfare (ASuW) capabilities, the corvettes feature two triple-cell launchers for six anti-ship missiles of an undisclosed designation. Although the missiles-in-question are yet to divulged, it is believed that they may actually be the Harbah anti-ship cruise missiles (ASCM), currently in service with the Pakistan Navy. The Harbah is an anti-ship variant of the Babur subsonic cruise missile, featuring an approximate range of 450–700 km (280–430 mi).

Initially, the corvettes were selected to feature the Chinese-origin HHQ-16 surface-to-air missiles, developed by the China Aerospace Science and Technology Corp (CASC). However, in 2021 — the Pakistan Navy revealed that it had selected the Albatros NG surface-to-air missiles developed by MBDA, instead. The Albatros NG — a variant of the CAMM-ER naval anti-air missile, features an approximate range of over 40 km (25 mi), with the capability to neutralize various aerial threats — including anti-ship missiles, unmanned aerial vehicles and precision-guided munitions. Incidentally, the PN MILGEM corvettes are also the first surface warships to utilize the Albatros NG.

In a parallel fashion to the Ada-class corvettes, the PN MILGEM class feature similar radar equipment.

The PN MILGEM class is equipped with the SMART-S Mk2 passive electronically scanned array (PESA) radar, license manufactured by Aselsan. The SMART-S Mk2 is a three-dimensional, multi-beam, long-range suraface/aerial surveillance radar, featuring an azimuth of 360o, with the capability to track both aerial and surface targets — at ranges of approximately 250 km (160 mi) and 80 km (50 mi), respectively.

The class also features the Aselsan ALPER low-probability-of-intercept radar (LPI) — for detecting and tracking both aerial and surface targets. The ALPER features an approximate range of 36 nmi (67 km).

In addition to the SMART-S Mk2 and the ALPER, the corvettes are also equipped with the AKREP (AKR-D Block B-1/2) fire-control radar (FCR) — capable of tracking and providing target information over an approximate range of 120 km (75 mi).

The corvettes feature the Meteksan YAKAMOS sonar system, as its primary sonar suite. The YAKAMOS is a hull-mounted, medium-frequency anti-submarine/obstacle-avoidance sonar, capable of detecting sub-surface targets within an azimuth of 360o azimuth over a range of 230 km (140 mi).

As part of its electronic warfare (EW) capabilities, the corvettes feature the Aselsan ARES-2N radar ESM system, along with ELINT and SIGINT modules. The ARES-2N is a long-range electronic support system, capable of detecting, intercepting, classifying, tracking and recording electromagnetic emissions of various targets, over an operating frequency of 2-18 GHz.

In addition to the two aforementioned systems, the class is also equipped with the Northrop Grumman LN-270 INS/GPS navigation system, for providing geopositioning and turret stabilization.