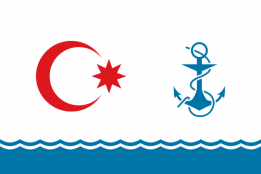 The Azerbaijan Navy is the naval component of the Azerbaijani Armed Forces operating in the Caspian Sea.