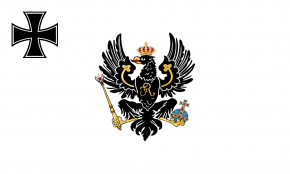 The Prussian Navy, was the naval force of the Kingdom of Prussia. It was created from the former Brandenburg Navy, following the elevation of the Duke of Prussia to King in Prussia in 1701. At that time, Brandenburg and Prussia formed a double state ruled in personal union by the House of Hohenzollern. The Prussian Navy existed, without any long interruption, until the founding of the North German Confederation in 1867, at which point the Prussian Navy was absorbed into the North German Federal Navy.

Throughout the centuries, Prussia’s military consistently concentrated on its land power, and never sought a similar power at sea. Yet historically there were always Prussian naval forces, beginning in the days when «Prussia» meant only the Margraviate of Brandenburg.