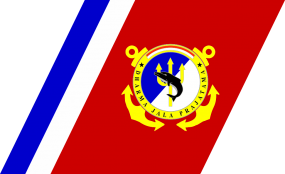 The Indonesian Sea and Coast Guard (Indonesian: Kesatuan Penjagaan Laut dan Pantai Indonesia – KPLP) is an agency of Government of Indonesia which main function is to ensure the safety of shipping inside the Indonesian Maritime Zone. KPLP has the task of formulating and execute policies, standards, norms, guidelines, criteria and procedures, as well as technical guidance, evaluation and reporting on patrol and security, safety monitoring and Civil Service Investigator (PPNS), order of shipping, water, facilities and infrastructure of coastal and marine guarding. KPLP is under the Directorate General of Sea Transportation of the Indonesian Ministry of Transportation. Therefore, KPLP reports directly to the Minister of Transportation of the Republic of Indonesia. KPLP is not associated or part of the Indonesian National Armed Forces, although some of its members are picked from the Indonesian Navy. KPLP, however often conduct joint-exercise and joint-operations with the Indonesian Navy.

During the Dutch colonial era, an agency under the colonial government called the Sea and Coast Guard Service (Dutch: Zee en Kustbewaking Dienst) was formed to protect the sea and coast of the Dutch East Indies. After the recognition of the independence of Indonesia by the Dutch, the agency was handed to the new Indonesian government and was renamed to Marine and Coast Guard Service (Indonesian: Dinas Penjagaan Laut dan Pantai Indonesia). The agency then changed its name several times resulting in its present name.

KPLP is not associated with the Indonesian Maritime Security Board (Indonesian: Badan Keamanan Laut Indonesia — Bakamla). While the former is under the jurisdiction of the Ministry of Transportation, the latter is under the jurisdiction of the Coordinating Ministry for Political, Legal, and Security Affairs. Both of them however has similar roles and functions. Both of them also often conducts joint-operation and joint-exercises together.