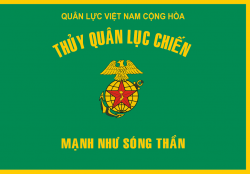 The Republic of Vietnam Marine Division (RVNMD) was part of the armed forces of South Vietnam. It was established by Ngo Dinh Diem in 1954 when he was Prime Minister of the State of Vietnam, which became the Republic of Vietnam in 1955. The longest-serving commander was Lieutenant General Le Nguyen Khang. In 1969, the VNMC had a strength of 9,300, 15,000 by 1973, and 20,000 by 1975.

The Marine Division trace their origins to French-trained Commandos Marine divisions recruited and placed under the command of the French Navy but officially incorporated in 1960. From 1970 onwards, the ARVN Marine Corps and Airborne Division grew significantly, supplanting the independent, Central Highlands based Vietnamese Rangers as the most popular elite units for volunteers. Along with the Airborne the Marine Division formed the General Reserve with the strategic transformation under Vietnamization, with elite and highly-mobile units meant to be deployed in People's Army of Vietnam attacking points and incursions. By then, the level of training had improved considerably and U.S General Creighton Abrams who oversaw Vietnamization stated the Airborne and Marines had no comparable units to match it in the PAVN.