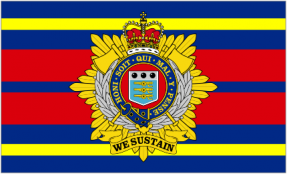 The Royal Logistic Corps (RLC) provides logistic support functions to the British Army. It is the largest Corps in the Army. The RLC flag is dark blue with the Corps Badge emblazoned on the centre. It has a Corps of Drums and a «Marching Band».