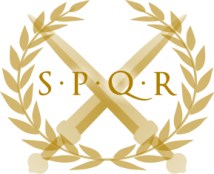 The Roman navy comprised the naval forces of the Ancient Roman state. The navy was instrumental in the Roman conquest of the Mediterranean basin, but it never enjoyed the prestige of the Roman legions. Throughout their history, the Romans remained a primarily land-based people and relied partially on their more nautically inclined subjects, such as the Greeks and the Egyptians, to build their ships. Because of that, the navy was never completely embraced by the Roman state, and deemed somewhat «un-Roman».

In Antiquity, navies and trading fleets did not have the logistical autonomy that modern ships and fleets possess. Unlike modern naval forces, the Roman navy even at its height never existed as an autonomous service but operated as an adjunct to the Roman army.

During the course of the First Punic War, the Roman navy was massively expanded and played a vital role in the Roman victory and the Roman Republic's eventual ascension to hegemony in the Mediterranean Sea. In the course of the first half of the 2nd century BC, Rome went on to destroy Carthage and subdue the Hellenistic kingdoms of the eastern Mediterranean, achieving complete mastery of the inland sea, which they called Mare Nostrum. The Roman fleets were again prominent in the 1st century BC in the wars against the pirates, and in the civil wars that brought down the Republic, whose campaigns ranged across the Mediterranean. In 31 BC, the great naval Battle of Actium ended the civil wars culminating in the final victory of Augustus and the establishment of the Roman Empire.

During the Imperial period, the Mediterranean became largely a peaceful «Roman lake». In the absence of a maritime enemy, the navy was reduced mostly to patrol, anti-piracy and transport duties. The navy also manned and maintained craft on major frontier rivers such as the Rhine and the Danube for supplying the army.

On the fringes of the Empire, in new conquests or, increasingly, in defense against barbarian invasions, the Roman fleets were still engaged in open warfare. The decline of the Empire in the 3rd century took a heavy toll on the navy, which was reduced to a shadow of its former self, both in size and in combat ability. As successive waves of the Völkerwanderung crashed on the land frontiers of the battered Empire, the navy could only play a secondary role. In the early 5th century, the Roman frontiers were breached, and barbarian kingdoms appeared on the shores of the western Mediterranean. One of them, the Vandal Kingdom, raised a navy of its own and raided the shores of the Mediterranean, even sacking Rome, while the diminished Roman fleets were incapable of offering any resistance. The Western Roman Empire collapsed in the late 5th century. The navy of the surviving eastern Roman Empire is known as the Byzantine navy.