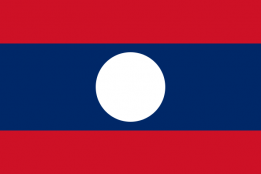 Almost all officers of the Lao People's Navy were trained in the Vietnam Naval Academy.