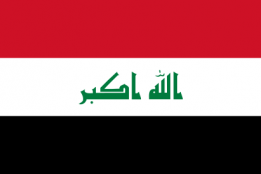 The Iraqi Navy (IqN) is one of the components of the military of Iraq. Its primary responsibilities are the protection of Iraq's coastline and offshore assets. Initially called the Iraqi Coastal Defense Force, its official name was changed on 12 January 2005.

As of February 2011, the navy had approximately 5,000 sailors and marines which form an Operational headquarters, five afloat squadrons, and two marine battalions.

Headed by Rear Admiral Muhammad Jawad, the navy had plans to build six Al Uboor-class patrol boats in Baghdad, with the first of the boats to enter service in September 2005. This project however, was ultimately canceled. Additionally, two Assad-class corvettes built for Iraq in the 1980s by Italy were originally planned to be delivered sometime around 2006–2007. The ships however, were found to be in a worse state than originally believed, forcing the Iraqi navy to reconsider the deal and instead buy 4, newer, smaller modified-Diciotti class vessels. The 5 British corvettes and 1 Soviet patrol boat operated by the Saddam Hussein-era Iraqi Navy were destroyed in the 1991 Persian Gulf War and the 2003 invasion of Iraq, respectively.

The Iraqi Navy is designed for coastal water protection; preventing the smuggling of people, oil and weapons; and to protect the country's oil platforms. As a result, it mainly needs patrol boats. These may be backed up by fast attack craft. The patrol boats need to have the ability to launch rigid-inflatable boats (RIBs) for boarding ships and also possibly be able to accommodate a helicopter which would increase their patrol capability. The Iraqi Navy is building a second Marine battalion. In 2016 the Iraqi Navy awarded money to a ship maintenance company to sustain its current fleet of ships.