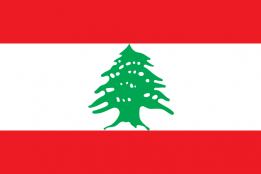 The Lebanese Navy (Arabic: القوات البحرية اللبنانية‎ Al-qūwātu al-Baḥriyya al-Lubnāniyya), literally «the Lebanese Sea Forces» is the Navy of the Lebanese Armed Forces. It was formed in 1950 and based in Beirut Naval Base, Lebanon’s first naval base. The flag of the Lebanese navy depicts a Phoenician ship with the Lebanese Cedar tree, positioned on an anchor above the Arabic inscription of the navy's name.

The Lebanese government approved on January 16, 2009 a request by the Lebanese Ministry of Defense to build a new naval base on the shores of Nahr el-Bared Palestinian refugee camp in northern Lebanon.

In Lebanon, marine conservation, marine pollution response and implementation of the international maritime conventions such as the international convention for the prevention of pollution from ships are the concern of the Lebanese navy, since it is the only state authority that can enforce the maritime law in both Lebanese exclusive economic zone and territorial waters.