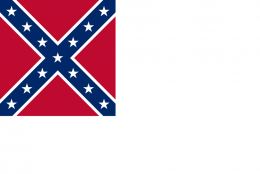 The three major tasks of the Confederate States Navy during the whole of its existence were the protection of Confederate harbors and coastlines from outside invasion, making the war costly for the U.S. by attacking American / Northern merchant ships worldwide, and running the U.S. blockade by drawing off U.S. Navy ships in pursuit of the Confederate commerce raiders and few warships.

The Confederate navy could never achieve numerical equality with the United States Navy, (then known as the Union Navy), with its near 70 years of traditions and experience, so it used technological innovation, such as ironclads, submarines, torpedo boats, and naval mines (then known as torpedoes) to attempt to gain advantage. In February 1861, the Confederate States Navy had 30 vessels, only 14 of which were seaworthy. The opposing Union Navy had 90 vessels. The C. S. Navy eventually grew to 101 ships to meet the rise in naval conflicts and threats to the coast and rivers of the Confederacy.

On April 20, 1861 the U.S. was forced to quickly abandon the important Gosport Navy Yard at Portsmouth, Virginia. In their haste, they failed to effectively burn the facility with its large depots of arms, other supplies, and several small vessels. As a result, the Confederacy captured much needed war materials, including heavy cannon, gunpowder, shot, and shell. Of most importance to the Confederacy was the shipyard's dry docks, hardly damaged by the departing Union forces. The Confederacy's only substantial navy yard at that time was in Pensacola, Florida, so the Gosport Yard was sorely needed to build new warships. The most significant warship left at the Yard was the screw frigate USS Merrimack.

The U.S. Navy had torched Merrimack's superstructure and upper deck, then scuttled the vessel; it would have been immediately useful as a warship to their enemy. Little of the ship's structure remained other than the hull, which was holed by the scuttling charge but otherwise intact. Confederate Navy Secretary Stephen Mallory had the idea to raise Merrimack and rebuild it. When the hull was raised, it had not been submerged long enough to have been rendered unusable; the steam engines and essential machinery were salvageable. The decks were rebuilt using thick oak and pine planking, and the upper deck was overlaid with two courses of heavy iron plate. The newly rebuilt superstructure was unusual: above the waterline the sides sloped inward and were covered with two layers of heavy iron-plate armor.

The vessel was a new kind of warship, an all-steam powered «iron-clad». In the centuries-old tradition of reusing captured ships, the new ship was christened CSS Virginia. She later fought the Union's new ironclad USS Monitor. On the second day of the Battle of Hampton Roads, the two ships met and each scored numerous hits on the other. On the first day of that battle Virginia, and the James River Squadron, aggressively attacked and nearly broke the Union Navy's sea blockade of wooden warships, proving the effectiveness of the ironclad concept. The two ironclads had steamed forward, tried to outflank or ram the other, circled, backed away, and came forward firing again and again, but neither was able to sink or demand surrender of its opponent. After four hours both ships were taking in water through split seams and breaches by enemy shot. The engines of both were becoming dangerously overtaxed, and their crews were near exhaustion. The two ships turned and steamed away, never to meet again. This part in the Battle of Hampton Roads between Monitor and Virginia greatly overshadowed the bloody events each side's ground troops were fighting, largely because it was the first battle in history between two iron-armored steam-powered warships.

The last Confederate surrender took place in Liverpool, United Kingdom on November 6, 1865 aboard the commerce raider CSS Shenandoah when her flag (battle ensign) was lowered for the final time. This surrender brought about the end of the Confederate navy. Shenandoah had circumnavigated the globe, the only Confederate ship to do so.