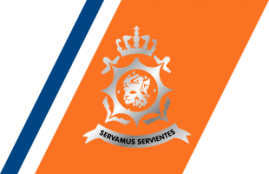 The Netherlands Coastguard (Dutch: Nederlandse Kustwacht) is a national organisation responsible for service and law enforcement tasks along the Netherlands' coast line and in the Dutch part of the North Sea.

Its operational centre falls under the Ministry of Defence and the Royal Netherlands Navy is responsible for its coordination.

While the Netherlands Coastguard was officially established on 26 February 1987, this does not mean there was no coastguard active in the Netherlands before 1987. Since 1883 there has been a coastguard active in the Netherlands in some sort of an unofficial capacity. In that year the Dutch government published a report named 'het houden van een uitkijk en het rapporteren van in nood verkerende schepen aan Hoofden Kustwacht'. The report was a reaction to the public outcry over an incident that had taken place in 1882, when the Dutch ship, HNLMS Adder, sunk off-coast at Scheveningen and led to the death of all 65 people aboard. The report led to lighthouses cooperating better with the relevant government agencies to help ships that were in trouble off-coast.

After World War II the area that could be covered off-coast became bigger with new technologies such as radars and better means of communication. Furthermore, the government became more interested in the North sea. They wanted to protect their interests, such as fishery, oil and gas extraction, and sand and gravel extraction. Eventually this led to each ministry establishing its own department that was focused on the North Sea and guarding the coast of the Netherlands. At one point there were more than 20 government organizations at work off the coast of the Netherlands. To stop this fragmentation, Minister Smit-Kroes of Traffic and water management ordered in 1984 a investigation to research how to make guarding the coast of the Netherlands more efficient and effective. The results of this report were published in 1986 and led to the official creation of one coastguard agency, namely the Netherlands Coastguard.

The Netherlands Coastguard has no assets, nautical or aeronautical of her own.