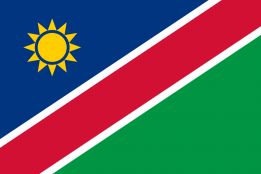 The Namibian Navy is the Maritime Warfare Branch of the Namibian Defence Force.

Development of Namibia's navy has been slow, and the force was only formally established in 2004, fourteen years after independence. Extensive Brazilian aid has assisted in the development of the Namibian Navy. The original core group of personnel was only sent to Brazil in 1995 after Walvis Bay was integrated into Namibia in 1994. This group consisted of command and staff officers. They completed their studies in 1998 from the Admiral Wandenkolk Instruction Center in Rio de Janeiro. The Maritime wing headquarters was established in 1998, while in 2000 the Navy base construction at Walvis Bay started. Consisting of approximately 1200 personnel the Navy deploys a small number of lightly armed patrol vessels. The first maritime wing commander was Captain Phestus Sacharia. The first ship to be commissioned into service was the donated patrol boat Oryx in 2002. Brazil and Namibia signed an agreement in 2004 for the delivery of a patrol boat and two smaller patrol craft. The newly built 200 ton patrol boat NS Brendan Simbwaye, built at the Brazilian shipyard INACE, was commissioned on January 19, 2009. An ongoing co-operation program allows Namibian sailors and naval officers to be trained by the Brazilian Navy; by 2009, 466 seamen had been trained. Brazil also provided assistance in preparing a nautical chart of the approach to Walvis Bay and consulting in charting the outer limits of the continental shelf. The Brazilian Navy has also trained the Namibian Marine Corps.