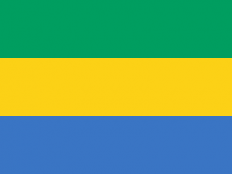 The naval forces of Gabon were created in December 1960, and are the naval component of the Armed Forces of Gabon. They control the coastal waters of the country (800 km of coastline). In 1983, the naval forces of Gabon became an independent unit, as they were previously under the leadership of the ground forces with headquarters in Libreville. Now the Gabon Navy consists of two naval bases located in Port-Gentil and Mayumba.