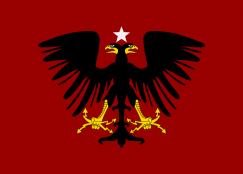 The first Albanian warship, albeit a ceremonial one, was the paddle yacht Taurus of the Austro-Hungarian government. This vessel briefly served as royal yacht, bringing the Albanian Prince William to the then-capital of Albania, the port city of Durrës, on 7 March 1914. Taurus was built in Britain in 1903 as Nirvana before being purchased by Austria-Hungary in 1909 for 25,000 Sterling pounds. She displaced 1,375 tons, measuring 67.1 meters in length. She had a top speed of 15.6 knots and was armed with four light guns (two 47 mm Hotchkiss plus two 37 mm).

The other warship of this period was the armed steamer Herzegovina. Chartered from an Austrian shipping company initially as a transport ship, this small steamer was hastily armed with a mountain gun and manned to fight the raging uprising against Prince William. She was used to bombard the town of Kavaja several times with little effect, before being run aground into a sandbank and heavily gunned by the rebels. She was ultimately recovered by her owners, who argued than the ship was not intended for military use.