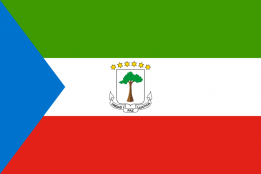 The Navy safeguards the 296 km maritime border of Equatorial Guinea. Its main purpose is to protect the nation's oil assets and prevent privacy in the Gulf of Guinea. The Russian and American navies have joint exercises with the Equatoguinean navy, besides the Obangame Express exercise in the Gulf of Guinea with 10 other nations. The navy is also used to patrol the Corisco bay islands which are claimed by both Equatorial Guinea and Gabon.

The Navy partially built a 107-m long frigate in the dry dock in Malabo. The frigate was commissioned on June 3, 2014 by president Teodoro Obiang Nguema Mbasogo and named after the Wele-Nzas Province. The ship was designed in Mykolaiv, Ukraine and built at Varna, Bulgaria. The outfitting was done at Malabo. The Wele-Nzas was designated as the flagship of the Navy.

The United States donated a 68 foot patrol boat, the Isla de Bioko (no longer operational) to the navy in 1988 to patrol its Exclusive Economic Zone. The Equatoguineans rely mainly on foreigners to operate the navy equipment it buys from foreign militaries.