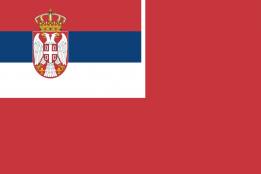 The Serbian River Flotilla is the specific unit of the Serbian Land Forces with the task of keeping an optimum operational regime of sailing and of protection of Serbian interests in interior sailing corridors. The area consists of rivers and canals with a total length of 1,626 km. The unit is composed of the Command ship Kozara, river minesweepers and assault loading boats. The command of River Flotilla is based in Novi Sad, as is most of its units, except for those based in Belgrade and Šabac.