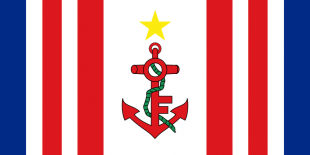 Mauritius does not have a standing army. All military, police, and security functions are carried out by 10,000 active-duty personnel under the command of the Commissioner of Police. The 8,000-member National Police Force is responsible for domestic law enforcement. The 1,500-member Special Mobile Force (SMF) and the 500-member National Coast Guard are the only two paramilitary units in Mauritius. Both units are composed of police officers on lengthy rotations to those services.

The National Coast Guard is a specialized branch of the Mauritius Police Force under the Commissioner of police. It was earlier known as the marine wing of the police force when Mauritius Naval ship Amar was acquired by Mauritius in 1974.

The main role of MNS Amar was then limited to search, rescue and coastal patrol. However in 1986 requirement for setting up a better structured and bigger organization was felt due to substantial growth in maritime activities around Mauritius, for controlling smuggling and enforcing fishing protection.

The blue print for such an organization was approved by the cabinet on 22 Jan 1987 and the National Coast Guard came into being on 24 July 1987 as a specialized unit of the Mauritius Police Force.

The bill on the formation of the NCG was enacted by the Parliament on 22 December 1988 which broadly promulgated the duties of the Force as follows:

The enforcement of any law relating the security of the State of Mauritius.

The enforcement of any law relating the protection of the maritime zones.

The detection, prevention, suppression of any illegal activities within the maritime zone.

Over the decade the National Coast Guard has grown up to become a well structured organization deploying multiple logistic support, equipment and human resources.