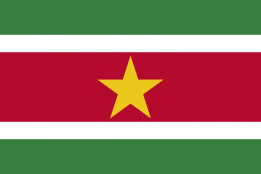 In 1977 the Navy (Marine) of Suriname received three large patrol vessels from the Dutch, built by De Vries Scheepsbouw. With a length of 32 meters each ship had two Paxman 12YHMC diesel engines of 1200HP performing a maximum speed of 20 knots. Delivery was between February 1977 and 1978 and the hull numbers were S-401, S-402 & S-403. Now all three are out of service, the last one S-401 later P-401 is still moored at the Marine Harbor. One was re-built as a luxurious yacht. All ships had their base at the Marine harbor on the Suriname river.

Today most of the fleet of the Marine of Suriname are based at Boxel, close to the resort town of Domburg in the Wanica District on the Suriname river.

In November 2012 the defence & internal affairs Ministry of Surinam bought three patrol vessels from the French company Ocea for the Coast Guard. This order was worth 16 million euros. These patrol vessels will be used for fishery protection and to counterattack piracy in Surinamese waters. The first Fast Patrol Boat (P201), a 32 meters long, 6,3 meters wide FPB 98 type, was delivered in June 2013. The first boat arrived in Paramaribo with a container vessel from the port of Saint-Nazaire, France. The vessels can reach speeds of 30 knots. Delivery of the remaining two vessels (P101 & P102), FPB 72 types (24 meters long), occurred by the end of July, 2013. The Surinamese Government ordered the three vessels, accelerating planning to set up a coast guard for Suriname that will be deployed to conduct patrol duties and fight maritime crime activities like illegal fishing, drug trafficking, and piracy.

The coast guard is a branch of the Ministry of Internal Affairs. Soldiers were transferred from the Navy Unit (Marine) of the National Army, to form the initial coast guard staff. The Maritime Authority of Suriname (MAS) is currently training 16 students from the Nature Technical Institute (NaTIn) and Technical Faculty of University of Suriname on how to conduct technical maintenance of the vessels. Ocea sent a trainer along with the boats to help conduct a six-month course. Colonel Jerry Slijngaard heads the Government's coast guard committee. While the first three boats will barely be sufficient to patrol Suriname's territorial waters and combat maritime crime activities such piracy, rapid reaction is now possible.

The unit has its own base on the banks of the Suriname River in Paramaribo, with posts at the border with Guyana (in western District Nickerie) and French Guiana (in eastern District Marowijne). Legislation on which the coast guard will be founded is almost finished. It will soon be tabled in the Council of Ministers and the Council of State, after which it will head for the National Assembly for approval. The new unit is a civil organisation, with authority to enforce the law in Suriname territorial waters. The Surinamese government does not intend to make cuts to the Navy (Marine), once the Coast Guard is fully operational. The Navy will keep operating in the high seas outside the 100-mile zone.