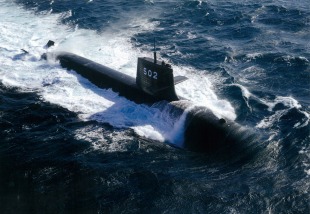 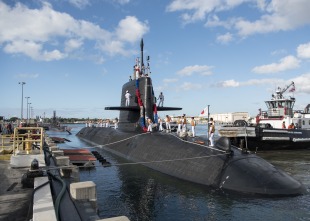 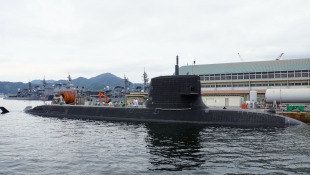 The Sōryū-class submarines (16SS) are diesel-electric attack submarines. The first boat in the class entered service with the Japan Maritime Self-Defense Force in 2009. The design is an evolution of the Oyashio-class submarine, from which it can most easily be distinguished by its X-shaped stern combination diving planes and rudders. The Sōryūs have the largest displacement of any submarine used by post-war Japan.

It is Japan's first air-independent propulsion submarine. From Sōryū to Shōryū are fitted with Kockums Naval Solutions Stirling engines license-built by Kawasaki Heavy Industries, allowing them to stay submerged for longer periods of time. Furthermore, Ōryū is the world's first lithium-ion battery submarine. The cost of the sixth submarine (Kokuryū) was estimated at 540 million USD.

The eleventh Sōryū-class submarine (Ōryū) is the first Japanese submarine in the fleet to mount lithium-ion batteries. The JS Ōryū was given a budget of ¥64.3 billion/US$536.7 million under the 2015 Japanese Defense Budget. Lithium-ion batteries have almost double the electric storage capacity of traditional lead-acid batteries, and by not only replacing them in the existing battery storage areas but adding to the already large battery capacity by also filling the huge space (several hundred tons displacement) inside the hull previously occupied by the AIP Stirling engines and their fuel cells with these new batteries, the amount of (more powerful) batteries carried overall is massive. This has improved the underwater endurance significantly and is felt will be an advantage over the slow recharge capability of the AIP system. In any event, JMSDF believes that lithium-ion is the way forward and intends to 'trial' this new system and compare it to the previous AIP system for operational effectiveness.