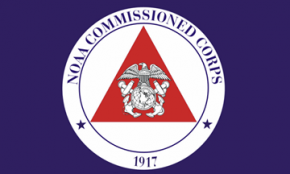 The National Oceanic and Atmospheric Administration Commissioned Officer Corps, known informally as the NOAA Corps, is one of seven federal uniformed services of the United States, and operates under the National Oceanic and Atmospheric Administration (NOAA), a scientific agency overseen by the Department of Commerce. The NOAA Corps is made up of scientifically and technically trained officers and is the smallest of the U.S. uniformed services. It is one of only two – the other being the United States Public Health Service Commissioned Corps – that consists only of commissioned officers, with no enlisted or warrant officer ranks.

The NOAA Corps was established in 1970, though its origins in its predecessor organizations date back to 22 May 1917. It is the successor to the United States Coast and Geodetic Survey Corps (1917–1965) and the United States Environmental Science Services Administration Commissioned Officer Corps (ESSA Corps) (1965–1970).