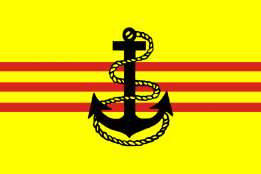 The Republic of Vietnam Navy (VNN) was the naval branch of the South Vietnamese military, the official armed forces of the former Republic of Vietnam (or South Vietnam) from 1955 to 1975. The early fleet consisted of boats from France. After 1955 and the transfer of the armed forces to Vietnamese control, the fleet was supplied from the United States. With assistance from the U.S., the VNN became the largest Southeast Asian navy, with 42,000 men and women and 672 amphibious ships and craft, 20 mine warfare vessels, 450 patrol craft, 56 service craft, and 242 junks.