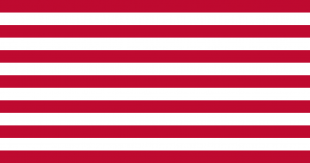 The Continental Navy was the navy of the United States during the American Revolutionary War, and was formed in 1775. The fleet cumulatively became relatively substantial through the efforts of the Continental Navy's patron John Adams and vigorous Congressional support in the face of stiff opposition, when considering the limitations imposed upon the Patriot supply pool.

The main goal of the navy was to intercept shipments of British matériel and generally disrupt British maritime commercial operations. The initial fleet consisted of converted merchantmen because of the lack of funding, manpower, and resources, with exclusively designed warships being built later in the conflict. The vessels that successfully made it to sea met with success only rarely, and the effort contributed little to the overall outcome of the war.

The fleet did serve to highlight a few examples of Continental resolve, notably launching Captain John Barry into the limelight. It provided needed experience for a generation of officers who went on to command conflicts which involved the early American navy.

The Continental Navy is the first establishment of what is now the United States Navy.

Of the approximately 65 vessels (new, converted, chartered, loaned, and captured) that served at one time or another with the Continental Navy, only 11 survived the war. The Treaty of Paris in 1783 ended the Revolutionary War and, by 1785, Congress had disbanded the Continental Navy and sold the remaining ships.

The frigate Alliance fired the final shots of the American Revolutionary War; it was also the last ship in the Navy. A faction within Congress wanted to keep her, but the new nation did not have the funds to keep her in service, and she was auctioned off for $26,000. Factors leading to the dissolution of the Navy included a general lack of money, the loose confederation of the states, a change of goals from war to peace, and more domestic and fewer foreign interests.