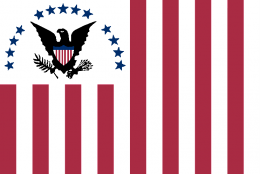 The United States Revenue Cutter Service was established by an act of Congress (1 Stat. 175) on 4 August 1790 as the Revenue-Marine upon the recommendation of Secretary of the Treasury Alexander Hamilton to serve as an armed customs enforcement service. As time passed, the service gradually gained missions either voluntarily or by legislation, including those of a military nature. It was generally referred to as the Revenue-Marine until July 1894, when it was officially renamed the Revenue Cutter Service.

The Revenue Cutter Service operated under the authority of the U.S. Department of the Treasury. On 28 January 1915, the service was merged by an act of Congress with the United States Life-Saving Service to form the United States Coast Guard.

Immediately after the American Revolutionary War the new United States was struggling to stay afloat financially. National income was desperately needed, and the government determined that a great deal of this income would come from tariffs on imports. Because of rampant smuggling, the need was immediate for strong enforcement of tariff laws. On 4 August 1790, the United States Congress, urged on by Secretary of the Treasury Alexander Hamilton, created the Revenue-Marine, later renamed the Revenue Cutter Service by act of 31 July 1894 (28 Stat. 171).

A cutter vessel is a small or medium-sized boat or sailing ship, built for speed and with a shallow draught. While some larger cutters had two or three masts, many cutters had only one, located more centrally on the ship than was typical of larger vessels. In modern times, any naval ship built for speed and agility is still referred to as a cutter.

Under the enabling legislation that authorized the Revenue-Marine, the «System of Cutters», consisting of ten vessels were initially ordered and constructed. Two cutters were to be assigned to «the coasts of Massachusetts and New Hampshire; one for Long Island Sound; one for New York; one for the Bay of Delaware; two for the Chesapeake (these of course to ply along the neighboring coasts); one for North Carolina; and one for Georgia». On 21 March 1791 the first seven masters were commissioned by President George Washington. Among those commissioned were Hopley Yeaton and John Foster Williams of Massachusetts, Jonathan Maltbie of Connecticut, Patrick Dennis of New York, James Montgomery of Pennsylvania, Simon Gross of Maryland, and Richard Taylor of Virginia. William Cooke of North Carolina was commissioned on 25 April 1791, Robert Cochrane of South Carolina on 8 May 1791, and 20 May 1791 John Howell of Georgia. Each cutter was constructed where it was to be assigned; a move by Hamilton to satisfy members of Congress and gain their votes for the establishment of the service. Washington suggested to Hamilton that it would be advantageous to have each master supervise the construction of his own cutter; a suggestion that Hamilton put into use along with a limitation that each cutter cost no more than US$1,000. Hamilton's cost restrictions proved unrealistic for three of the new cutters, Massachusetts cost US$2,050, Scammel cost US$1,255, and General Green cost over US$1,500.

The same legislation that established the ten original cutters also provided for the complement and pay scales of the crew of each vessel. Each vessel was provided with a master with pay set at $30 per month and three mates at $20, $16, and $14, respectively. In addition each cutter was allowed four mariners at $8 apiece and two boys at $4.

In 1990, the Commandant of the Coast Guard, Admiral Paul A. Yost, Jr. established a military award known as the Coast Guard Bicentennial Unit Commendation, which commemorated the original founding of the U.S. Revenue Cutter Service.