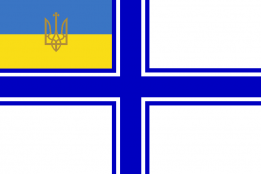 Navy of the Ukrainian People's Republic was a marine military force of the Ukrainian People's Republic that was based on a free will of Imperial Russia sailors to pledge allegiance to Ukraine. The force was never fully operational as the country constantly fought for its survival with the neighboring Soviet Russia. Eventually most of the Black Fleet was either sunk by the Bolsheviks or become part of expeditionary force of the White movement on evacuation.