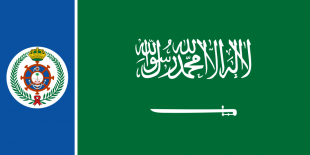 The Royal Saudi Navy, sometimes referred to as the Royal Saudi Naval Forces (RSNF), is the naval force of the Kingdom of Saudi Arabia. The Navy has more than 60,000 officers and men, including Marines. The Naval headquarters is in Riyadh. The Western Fleet is based in the Red Sea with the main base at Jeddah. The Eastern Fleet is based in the Persian Gulf with headquarters at Jubail. Other naval facilities were located at Yanbu, Dammam, and Ras Mishab.