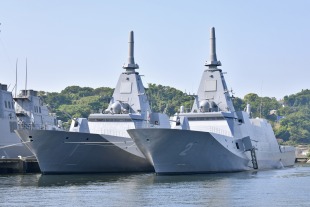 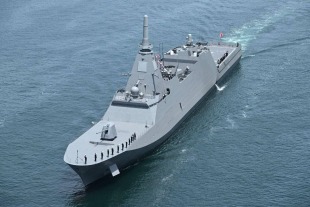 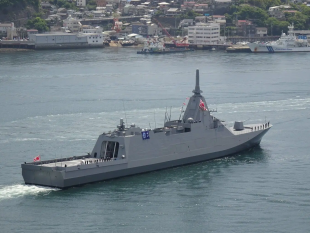 In 2015 the Japanese defense budget allocated funds to study the construction of a new «compact-type hull destroyer with additional multi-functional capabilities» as well as a new radar system for the destroyer. In the same year Mitsubishi Heavy Industries (MHI) unveiled the frigate's first concept model (30FF) which they had been developing with their own funds.

In August 2017, the Acquisition, Technology & Logistics Agency (ATLA) selected MHI and Mitsui Engineering and Shipbuilding as the prime contractor and subcontractor to construct the frigate. In addition, the agency also selected a completely new design of the vessel (30DX). The new ship is set to replace the Asagiri-class destroyers and Abukuma-class destroyer escorts.

Construction of the 30DX was to begin in 2018. A total of twenty-two units built to this design are planned by 2032, of which the first eight were under contract by 2018; a pair are to be built each year.

The overall intent of the 30DX design is to achieve a modern frigate-sized vessel with capabilities similar to the Akizuki-class destroyer but with a reduced crew and having only half the VLS cells.

However, it was the 30DX model that was eventually chosen to be constructed. The 30DX design (although modern) is more conservative compared to the 30FF's more radical approach. The three main factors for the design change were due to the need for affordability, miniaturization/automation, and multi-mission capabilities. The vessel has an overall length of 130 metres (426 ft 6 in), breadth of 16 metres (52 ft 6 in), a standard displacement of 3,900 metric tons (3,800 long tons) with a full load displacement of about 5,500 metric tons (5,400 long tons), and a maximum speed of over 30 knots (56 km/h; 35 mph). The frigates will be powered by a Rolls-Royce MT30 gas turbine.

Weapons for the 30DX include a Mk 45 gun, two remote weapon stations above the bridge, 16-cell Mk 41 Vertical Launching System (VLS) at the bow, 8 anti-ship missiles, one SeaRAM, an SH-60L helicopter, torpedoes, and decoy launchers. Another capability is to deploy and recover unmanned underwater vehicles (UUV), unmanned surface vehicles (USV), and sea mines from the rear ramp beneath the helo deck. The 30DX will also expect to use a naval version of the JGSDF's Type 03 Chū-SAM long-range AA missile.

The stealthy design of both models is based on the research and development lessons learned from the Mitsubishi X-2 Shinshin (then: ATD-X) stealth fighter technology demonstrator, as both platforms are designed by Mitsubishi Heavy Industries. Along with stealth capabilities, the frigate also emphasizes having a high level of automation. This allows the frigate to possess a low crew size of only 90 personnel when compared to the crew complement of other ships of similar size.

Japan plans to export four frigates to Indonesia, and another four will be built in Indonesia under ¥300 billion contract. In March 2021, Japan and Indonesia signed a military cooperation agreement, which reinforces the delivery. 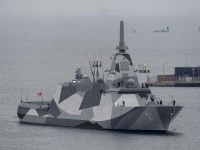