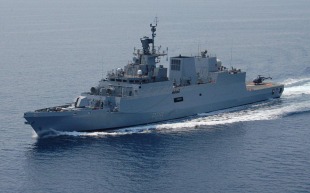 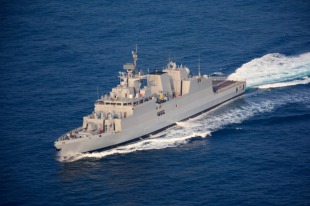 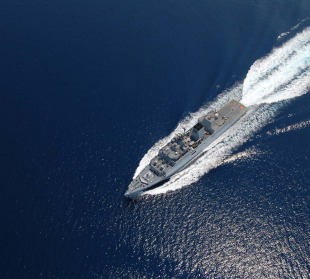 The Kamorta-class corvettes or Project 28 are a class of anti-submarine warfare corvettes currently in service with the Indian Navy. Built at Garden Reach Shipbuilders & Engineers (GRSE), Kolkata, they are the first anti-submarine warfare stealth corvettes to be built in India. Project 28 was approved in 2003, with construction of the lead ship, INS Kamorta commencing on 12 August 2005. All of the four corvettes, INS Kamorta, INS Kadmatt, INS Kiltan and INS Kavaratti were commissioned in 2014, 2016, 2017 and 2020 respectively.

The platform and major internal systems of this class of corvettes are indigenously designed and built. The corvettes are named after the islands in the Lakshadweep archipelago.

The project's objective was to enhance localisation and development of warship construction industry in India. The navy asked the Indian industries to deliver equipment of higher sophistication levels than usual. This led to some unforeseen delays in the product delivery, and struggles perfecting the products.

All the ships of this class are built using DMR 249A special grade high-tensile steel, produced by the state-owned Steel Authority of India Limited (SAIL), and carbon fiber reinforced plastic (CFRP) materials. The main machinery is raft mounted, and each gear unit and its associated engines are mounted on a common raft. The diesel engines are license built by Kirloskar under SEMT Pielstick of France. DCNS supplies the noise-suppressing raft-mounted gearbox for CODAD propulsion. Wärtsilä India manufactures the low-vibration diesel alternators to power the on-board electronics.

INS Kiltan and INS Kavaratti are to be more advanced than their elder ships. In a first, composite materials, imported from Kockums, Sweden, are used for the construction of the superstructures. This resulted in increased stealth features, reduced weight relative to typical superstructures built with steel, anti-corrosive and fire resistant. It's also projected for the ships to have some additional armament and new features.

In 2003, under the code name Project 28, the Indian Navy placed an order for four ASW corvettes. The corvette's design was originally planned to be based on the Russian corvette Project 2038.2, however the basic design was later provided by the Indian Navy's Directorate of Naval Design, followed by the detailed design by GRSE. The design includes many stealth ship features, including reductions in acoustic signature and vibration of the vessels.

The class incorporates some major features including but not limited to the 'X'-shaped hull form to improve stealth, a raft-mounted propulsion system to reduce vibration, and an infrared signature suppression system. It also includes networks such as the Total Atmospheric Control System (TACS), Integrated Platform Management System (IPMS), Integrated Bridge System (IBS), Battle Damage Control System (BDCS) and Personnel Locator System (PLS). The ships also include technology that enables them to fight in Nuclear, Biological and Chemical (NBC) warfare scenarios. The Indian Navy claims that the indigenisation achieved in these ships is about 90%.

They are propelled by four Pielstick 12 PA6 STC Diesel engines, each with a power of 5,096 hp (3,800 kW) in CODAD configuration. They also have two controllable pitch propellers which helps the ship achieve maximum speeds in excess of 25 knots (46 km/h; 29 mph).

The armament of the class includes a license-built OTO Melara 76 mm Super Rapid Gun in a stealth mount and a weapons layout similar to what is found on the Talwar-class and Shivalik-class frigate, two Larsen & Toubro built derivatives of the RBU-6000 anti-submarine rocket launcher, as well as Larsen & Toubro torpedo tube launchers, and a pair of AK-630M close-in weapon system (CIWS). The fire-control system is the Bharat Electronics IAC Mod C system.

There is an option on the ship to include surface-to-air missiles (SAM). But it is unclear as to which SAM will be integrated into the Kamorta-class corvette. Options include Barak 1 and the Barak 8. The corvette can hold one helicopter, which currently is a Westland Sea King Mk.42B helicopter.