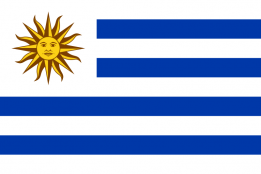 The National Navy of Uruguay (Spanish: Armada Nacional del Uruguay) is a branch of the Armed Forces of Uruguay under the direction of the Ministry of National Defense and the commander in chief of the Navy (Comandante en Jefe de la Armada or COMAR).

The ship prefix for Uruguay is ROU (for República Oriental del Uruguay, the «Oriental Republic of Uruguay»). In addition to their ship name, government ships are numerically listed. This is a position and not an identification number: as ships are decommissioned and replaced, their previous numbers are reused by newer vessels.